Where Are We Today
Zuzax New Mexico
(click on pic to enlarge)
Today we are in Zuzax New Mexico near Tijeras which is just east of Albuquerque. Arriving at 5 pm, yesterday, after driving 426.8 miles we were right beside another Canadian couple, Jill & Mike, from Vernon British Columbia, who were just setting up. After supper we got together to exchange stories.
Back to our day of travel, we left Elk City Oklahoma at 8:30 am, under cloudy skies and cool a temperature of 52 F.  Right off the start we could tell we were climbing to higher elevations, continuing west on I 40, it would be a steady easy climb topping off just over 7000ft, with a few dips here and there, and finishing at 6638ft above sea level.

Shortly after getting started we had to make a quick stop for fuel and then carry on down the road. Crossing into Texas just after 9:00am we drove until we came to the first rest stop at 9:55 am for about 15 minutes. Still cloudy and only 51 *F at 3110 ft but beautiful scenery. On our way again across the Texas panhandle passing fields of cotton and cattle, we stopped at Cadillac Ranch to paint our names on and take a few pics of the Cadillac's stuck in the ground. An hour later we pulled into a picnic area to make some lunch, temperature up to 57* F and blue skies returning.


Passing into New Mexico just after 1:00pm and stopping for our second fill of fuel for the day at Russel's Truck Stop, exit 392, lots of trucks coming and going. With the cooler temps and higher thinner air, our fuel mileage is lower than our first few days, not by a lot and did expect it to be, so not a surprise.
At 2:30 pm, we were passing thru 4500 ft. near Tucumari and Montoya NM. with mountain ranges to the north and south and the temperature now up to 75* F. Moving right along we passed thru 7001 ft. at Clines Corner NW. around 3:00pm.
Speed limits along I 40 range from 65 to 75 MPH, I have our cruise control set between 60 and 65 MPH, not in any hurray, just a nice comfortable speed and I do enjoy driving.


At exit 178, Zuzax NW. to state hwy 333, a short hop to our camp ground, " Hidden Valley" at  Tijeras NM. Here for two nights before we head on down that road to our next destination, where ever that may be.
I think we will slow down a bit and take in a few sights if see something we like and stop when we feel like it. So far, each day we have had a destination that we planned on getting to.
Thanks for following along, until the next time, take care and be safe.

Posted by Bill Richards/ On Our Way at 12:08 PM 4 comments:
Email ThisBlogThis!Share to TwitterShare to FacebookShare to Pinterest

Center of America " The Heartland"

Where Are We Today
Elk City Oklahoma
(click on picture to enlarge)
After three nights at Eagles Landing Campground in Grove Oklahoma, we are " On the Road Again" by 8:30, heading south then west. To avoid the I44 turnpike to Oklahoma City, we headed south from Grove Ok. on state road 59 to Alternate state road 412. Both these are two lane roads which twist and turn and go up and down some hills, but are quite nice to drive on.

We have stopped for the night at a 24 hour Wal-Mart on Regional Dr. in Elk City Oklahoma.
It has been a beautiful sun filled blue sky day with a high of 84 F/28.8 C with a nice breeze, couldn't ask for a better day.

Thanks for following along and until the next time, take care and be safe.
Posted by Bill Richards/ On Our Way at 7:53 PM 3 comments:
Email ThisBlogThis!Share to TwitterShare to FacebookShare to Pinterest
Labels: Heartland

Where Are We Today
Grove Oklahoma
Today was a non travel day, not so much a day of rest as we did do some sightseeing. After breakfast, some computer reading and catching up on my book keeping we headed out to see some sights.
On a suggestion from George, Our Awesome Travels we went to see Har- Ber village, which Pat is writing about Chillinwithpatsy and then on to see Darryl Starbirds national Rod & Custom Car Hall of Fame, great suggestion George, we really enjoyed them both.

The following are some of the pics that I took. Not all the cars are his, some are from other designers and builders.Darryl Starbirds Hall of Fame 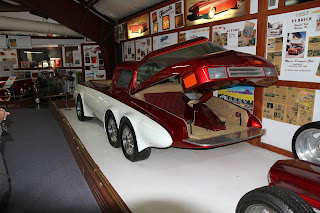 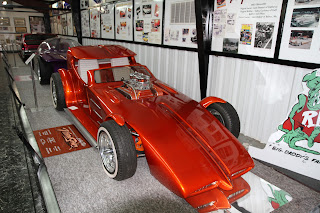 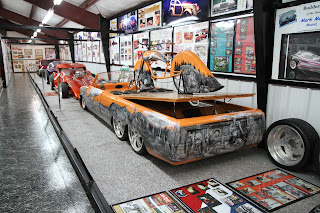 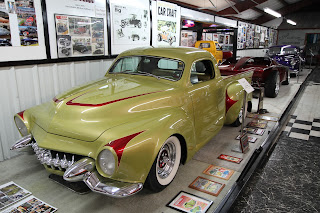 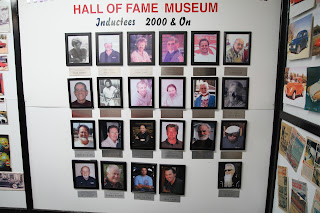 After that we took a drive around to the other side of Grand lake to the Pensacola Dam between Langley and Disney Oklahoma. Spanning one mile across the Grand Lake, it is the longest multiple arch buttress dam in the world.
Pensacola Dam

Returning back to our camp site in the late afternoon after a enjoyable day that started out foggy until about mid day to beautiful clear blue skies with temperature of 74 F.
After supper, a nice walk around the park before retiring inside to write this post.
Posted by Bill Richards/ On Our Way at 8:07 PM 4 comments:
Email ThisBlogThis!Share to TwitterShare to FacebookShare to Pinterest

Where Are We Today
Grove Oklahoma

Today we traveled from Wentzville Mo. to Grove Ok. Our route took us on I 70 to Olive Creek road to MO. 109 to Mo. 100 West then onto I 44 to the Will Rogers Turnpike to U.S. 59 which brought us to Eagles Landing Resort Camp Ground at Grove Ok.


Olive Creek Road is a narrow winding and very hilly two lane road, the rest are all four lane roads until U.S.59. Missouri is very hilly in places with beautiful scenery and also running alongside the old Route 66.


Again, I must say how pleased I am with the truck performance. With tow haul mode, engine brake and cruise control all set, we climbed and descended all the grades without having to touch the gas or brake.

We came upon an accident near Miami Ok. moments after it happened. Although we saw it in plenty of time and stopped, others just can't clue into what is going on and came close to hitting us or the transport beside us who also was paying attention and had stopped. It looked like minor injuries so hopefully everyone is ok.


Our spot tonight looks great, but will check out the area tomorrow.
Thanks for following along and until the next time, take care and be safe.


Posted by Bill Richards/ On Our Way at 7:41 PM 2 comments:
Email ThisBlogThis!Share to TwitterShare to FacebookShare to Pinterest

Where Are We Today
Wentzville Missouri

We now have two days of travel under our belts. We left "The Ridge" at 9:00 a.m. on Monday morning. After stopping for propane and diesel fuel in Durham we were on our way towards Sarnia/Port Huron, crossing into the states at 1:00p.m. After about half an hour we were thru leaving some of Clemson's dog food because the customs officer said it had meat by products and he couldn't see where it was made.  I'm sure ifg he looked hard enough or let me find it, he would have seen it was made in the U.S. of A. We bought the same dog food here at a Walmart that night.

We arrived at and stayed in the Walmart parking lot at Apple Glen Blvd in Ft. Wayne In at 5:45 p.m. A total of 421.5 miles for the long good day of driving.
We purchased our Verizon Ellipsis Jetpack FE46, activated it and are all set for internet. 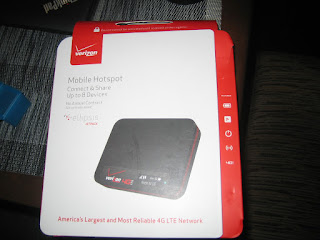 On our way by 9:30 a.m. Tuesday morning for another 400 miles arriving at another Walmart in Wentzville Mo. just outside of St. Louis.
That's a total of 822.3 miles averaging between 10.5 and 11.2 miles per galllon. Very pleased with the performance of the truck (Ford F350, diesel. dual wheels and the trailer) with the miles we have driven so far. Even though it has been four lane roads, there have been some rough areas, shaking things up in the trailer pretty good. Broke two door catches on the cupboard door to our control panel.

Tomorrow, Wednesday we are heading for Grove Ok. to one of our time share camp grounds for a couple of days of R&R.
That's it for now, thanks for following along, until the next time take care.
PS: the temperature when we got here tonight was 70 F.

Posted by Bill Richards/ On Our Way at 8:32 PM 8 comments:
Email ThisBlogThis!Share to TwitterShare to FacebookShare to Pinterest
Labels: Travel

Where Are We Today
"The Ridge" near Durham, On.

As mentioned in my last post, I said that I had some projects on the go. One of those was, to make a shelf unit for in the basement storage area. We have a lot of open space, so I thought a shelf would help to store smaller items. The following picture is of the finished project.

A second project was to find away to mount our flag holders to the pin box. On previous trailers the pin box stuck out more then on this trailer. It is too far back to be able to drill holes for mounting the holders.
Fellow blogger and full timer, Rick, from "It's About Time" has a unique holder for theirs, but after asking him where he got it, I discovered that he put his creative talents and skills from his working trade to use and made it.
So, my solution was to purchase a piece of aluminum angle iron from the local automotive supplier and a couple of new flag holders from Home Hardware, put them together and fasten to the front of the pin box. I will try this and see how it holds up over travels this winter. 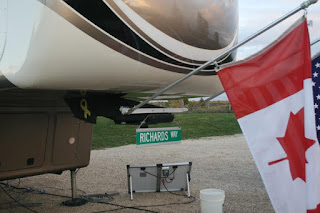 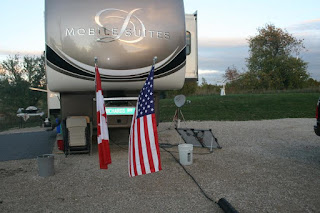 Both Pat and I had been kicking around the idea of moving our car shelter so we could move where our trailer sits. The reason for moving the trailer is so we can gravel the other side of the corral. This would allow us to drive up that way and back into our spot without making a u-turn coming up the way we do now.
For the two of us to move the car shelter, I separated the legs and carried the bottom half of the legs, which are set in 5 gallon pails filled with rocks to hold it in place. After doing that,  using a couple of ropes, so we could turn it over gently, we could  then move the rest of the shelter in one piece to its new location. Once there, reverse the process, put the legs back on and voila, all done and it only took an hour.
Next was to re position the trailer. So we went about moving everything out of the way, hook up the truck and do a little jiggy jag, and there we are, everything back in place.
Definitely worth the couple of hours it took to do both tasks. 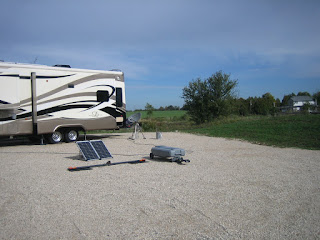 We really like the change and it gives more area for maneuvering our trailer and anyone else that comes to visit.
So that is some of the things we have been doing around "The Ridge". Thanks for following along, be safe and take care.
Posted by Bill Richards/ On Our Way at 8:43 PM 4 comments:
Email ThisBlogThis!Share to TwitterShare to FacebookShare to Pinterest
Labels: Projects and changes
Newer Posts Older Posts Home
Subscribe to: Posts (Atom)