Where Are We Today
Arkona , Ontario

This post is about my hobby, Radio Control Airplanes, which I have been involved in for about 40 years. Last August, I had a friend do the maiden flight on my Stinson Reliant SR9. It actually had three flights that day, all which went very well, with minor mishap on the third landing. So this post is about the repair process for that mishap, which was a broken landing gear.

First off, I had to make a cradle to set it in while doing the repair, then open up the damaged area and strip out any broken pieces.


To reinforce the broken former's, I decided to double the former's with 1/4 inch ply.

Most landing gear are one solid piece, made out of aluminum, on this model the landing gear is two separate pieces, which I think is part of the reason for the structural damage. 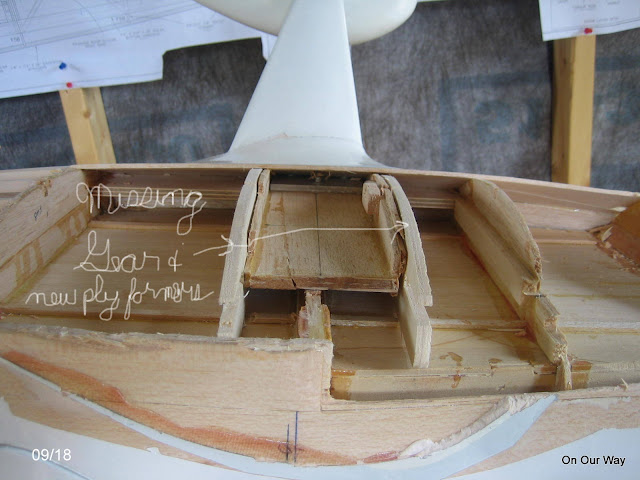 My solution to beefing up the landing gear was to tie the two separate landing gear together with another piece of aluminum. I used two pieces of 1/8 by 2 inch, as a 1/4 by 2 inch wasn't available. 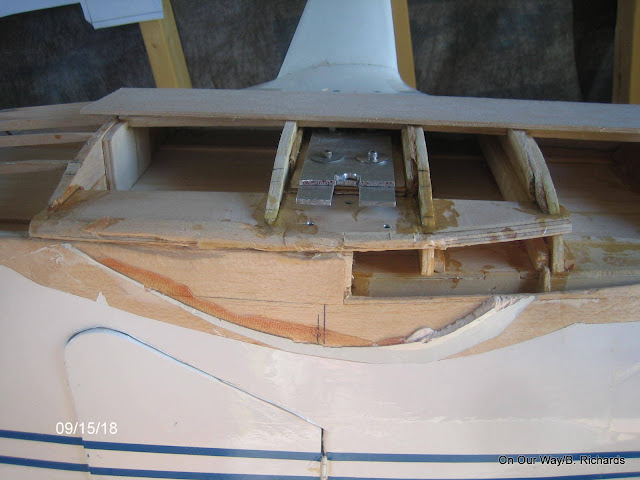 Bolting the two pieces of aluminum to a 1/4 in. piece of ply, which was then epoxide to the support between the two landing gear. I then drilled and tapped through the two 1/8 in pieces into the two separate landing gear and bolted them together.

Next, put the balsa sheeting on to close up the underbelly of the fuselage. This is as far as I got this fall before closing up for the winter. I will finish the rest of the repair in the spring.
Thanks for following along, comments are always welcome. Until the next time, take care and be safe.

Posted by Bill Richards/ On Our Way at 7:45 AM 6 comments:
Email ThisBlogThis!Share to TwitterShare to FacebookShare to Pinterest

Where Are We Today
Rock Glen Family Resort
Arkona Ontario

We have started our migration to the southwest, albeit a short first leg, we are on our way. The first leg took us from "The Ridge" to our home park, Rock Glen Family Resort, here in Arkona Ontario.  Here we will spend a week saying good bye to family and friends, getting schedule maintenance done to the truck, some last minute groceries and supplies and most important, waiting for our friends Rob and Pat to join us this Saturday, as we will be travelling together this winter. That adventure we are so looking forward to, will start on Sunday, Oct. 28th, 2018. For details on the day to day adventures, check out "chillin with patsy", which most of you read.

In this post, to get back in the flow of writing, I thought I would write about one of  my fall projects. This one is about the wind screen that I made for our "Weber Q BBQ", not an original idea of mine, but one from George, from "Our AwesomeTravels". I must admit that this has been something on the to do list for at least two years, so it's about time.

I had a piece of metal roofing left over from building" The Hangar ", so it was put to use and after much head scratching, a design came to vision. With a pair of tin snips, file and a dremel tool cutting wheel, also some tweaking in the design, a screen was manufactured.

Because our "Weber" has wings, the screen is a fair size, which won't quite fit on the table we use for the BBQ. A piece of plywood was purchased and cut to size with holes drilled through to fasten the screen to it. I am pleased with the final result except one modification is necessary. Cutting with tin snips leaves jagged edges, although I did file them, I have used pipe wrap to cover them. When I open the lid of the BBQ, it touches the pipe wrap and the heat of the lid melts it. So I plan to notch out the lid in that area and all should be good.
Bringing this post to an end, is a good idea at this time, don't want to bore you too much. Another will follow shortly, on another project. Thanks for following along, comments are always welcome.
Until the next time, take care and be safe.