This brings us to U.S. 60E, also a two lane roadway, you turn onto U.S.-60E at Fairland Ok. Right off the bat, I thought this was not going to be a smooth ride. Once we cleared the town, the road smoothed out and we had a nice ride to I-49N. Having said that, my rating for U.S.-60E is a 8 out of ten.
That was the extent of the two lane roadways, the rest of our 5th leg trek is on interstate highways. Beginning with I-49N and I-44E. Both of these highways I am going to rate at 8.5 out of ten except for the last section of I-44E from St. Claire to St. Louis, Missouri. This section got a little worse, so I will rate it as a 8 out of ten.

Entering the city of St. Louis, we merged onto I-55N/I-70E, driving thru the city close to the famous Arch, finally merging onto I-70E. I wanted to rate this road at a 8 to 8.5, but sadly the bridges are in rough shape so my overall rating is down to a 7.5 from here into Effingham, Illinois, where we stopped for the night at a Cracker Barrel.

There has been some rain today but only intermittent wiper use.
Day two of our trek is a whole other story. Starting out with rain that continued all day to our destination in Wapakoneta Ohio.

Travelling on I-70 E through the rest of Illinois and then through Indiana, taking the I-465 S then I-465 N bypass around Indianapolis to I-70 E, this highway continued to be a seat retching, vehicle jarring  road. The worst are the bridges along with some stretches of the roadway,  it comes close to I-69 that we travelled last winter.

Once we entered Ohio, I-70 E became much smoother that I will rate the rest of the travel on it as a 8 out of ten.
At Dayton Ohio, we merged onto I-75 N. You want to make sure you are in the right lane for this, as it is only a single lane exit and you must slow down to 20 MPH as it is a sharp right hand curve down onto I-75.
I-75 N to Wapakoneta, Ohio is a smooth ride that I will rate as an 8.5 out of ten.

This has been a long day compared to yesterday, the constant rain and mist from the passing vehicles, trying to read the road signs in the rain and watch for the right lanes has been tiring. I like to drive, and even though it was less miles today, I was ready to get off the road for day when we did.

Thanks for following along, hope these reports help if you happen to be coming this way. There are only two more legs of our trek until we are back in Ontario Canada that I will report on. Stay tune for them.
Until the next time, stay well and travel safe.

Posted by Bill Richards/ On Our Way at 7:33 PM 9 comments:
Email ThisBlogThis!Share to TwitterShare to FacebookShare to Pinterest
Labels: Road Ratings

Where Are We Today
Grove Oklahoma
We have all heard that comment, the GPS took me down the wrong way or something to that effect. I use our GPS, which I find to be very accurate, when going somewhere new along with checking Google maps.

If you read Pat's blog about our drive here to Grove, you would have read about three off the route turns, I cannot blame the GPS.
To start off with, I turned left onto US-81 instead of right, like the GPS said to. Thinking it would be quicker to go back an exit to get onto I-40, then driving through El Reno. But, doing this, we were going away from I-40, so started following the GPS. 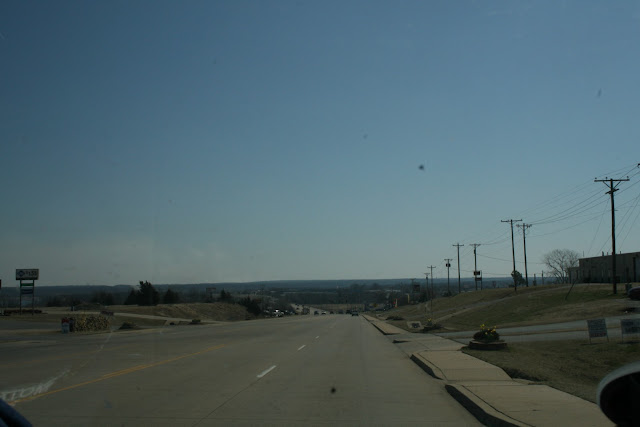 At this point, we were looking for a Flying J with a Denny's so we could get something to eat and fuel up. We found one at N129th street just off I-244E. Having satisfied both food and fuel, we were ready to get back on the road. Normally, where you get off at an exit, there is the ramp to get back on, not in this case. Second mistake with the GPS, if I had looked at when coming out of the Flying J, I would have seen it telling me to turn left to get onto I-44E, as you could not get back onto US-412E/ I-244E at N129th street to get to I-44E.

I got ourselves turned around and back down past the Flying J and onto I-44E. A few miles down the road and I'm about to make my third and final error of the day. Of course I'm following the GPS, which is taking us to our destination, but we would travel on a toll road, which I didn't want to do.  So,  once again we were getting turned around back to I-412 E to Alt. 412E to US-59 and into Grove.

Not one of these errors were the fault of the GPS, if I had followed it in the first place, it would have taken us to our destination as long as I remembered to get off at I-412E like I had planned to do.

Travelling all those roads from the start to Tulsa was sure the scenic route, but a pleasant drive. As far as what my road ratings are for these roads, I am going to go with an 8 to 9 out of 10 for all. There was one of the towns we went through that was more like a 7 out of 10, but your speed was at 30 mph and didn't really effect you much. As interesting as the route was, we probably wouldn't take it again, but stick to the interstate.
Thanks for following along, until the next time, take care and be safe. Your comments are always welcome.

Posted by Bill Richards/ On Our Way at 3:42 PM 9 comments:
Email ThisBlogThis!Share to TwitterShare to FacebookShare to Pinterest
Labels: 3 wrong turns, Grove

Where Are We Today
Lucky Star Casino
El Reno, Oklahoma
Yesterday, March 11th, we left Bottomless Lake State Park and travelled to El Reno Oklahoma, a total of 460 miles.
Starting out on Bottomless Lake Rd. to US 383 to Roswell on nice  smooth paved roads that I will rate as 9 out of 10.

This has been a great travel day, cool and windy at times, it was still an easy drive. Would we take this route again, probably not, but never say never. Even though there are low ratings on some of these roads, remember that they are averages. The biggest drawback for us, is that from Roswell to Canyon, there are few places to eat that we could pull into with our rig, and one place to get fuel,  also in this section, there were no rest areas, only one picnic area.

So, here we sit at the Lucky Star Casino in El Reno OK. until Wednesday when we will head off to our next destination of Grove Ok. Stay tune for road updates to there. Until the next time, take care and be safe. Feel free to comment and I will answer.

Where Are We Today
Bottomless Lake State Park
Roswell New Mexico
Tonight's post is a short one about the route we took today after leaving Elephant Butte State Park.

This is a very nice scenic drive, I-25 & I-70 are four lane roads and the other two are two lane. We thoroughly enjoyed the route we took today.
That's it for now, until the next time, take care and be safe. Comment if you wish.

Posted by Bill Richards/ On Our Way at 8:51 PM 12 comments:
Email ThisBlogThis!Share to TwitterShare to FacebookShare to Pinterest
Labels: Road Ratings

Where Are We Today
Elephant Butte State Park
New Mexico
Yesterday March 1st, 2018 was moving day, we started our slow, take our time crawl home. Our plan as of now is to cross into Ontario on April 7th, spending a few days in London before heading up to Durham.
Setting up in this picturesque state park for a week, we will settle into relaxing, reading, sun soaking and a little sightseeing before we move onto the next location.

To follow our daily activities, stay tune to Pat's Blog, she is much better writing about it then I am.


As in the past, I am rating the roads on our route here. The following are the roads we travelled from Quail Ridge RV Resort at Huachuca City/Whetstone Az. to Elephant Butte N.M.