Well here I go again, late with a post. That seems to be a theme right now. I have written about this RV Show before, so that's maybe why I wasn't in a hurry. RV shows are RV shows, the same thing really, just a different location, different people and trailers. That being said, we still see some of the same people from one time to the next. They are still looking for that perfect trailer or they are there for something to do.  They usually remember that we are going full time next year and ask if we are still going to, the answer is YES!!! We enjoy our time here, meeting people who are interested in RVing. Talking to them about what they do,  would like to do, what kind of trailer they are looking for and about what we do.

Posted by Bill Richards/ On Our Way at 8:37 AM No comments:
Email ThisBlogThis!Share to TwitterShare to FacebookShare to Pinterest
Labels: RV Show

I said in my last post that I would try and get the next one out sooner then later, so here it is.

We managed to get off work a couple of hours early on Friday so we could get to " The Ridge " before dark. It was a good trip up with only a couple of slow downs on the short stretch of the 401 that we travel. Arriving just before sunset and all set up before dark.

Posted by Bill Richards/ On Our Way at 9:33 AM No comments:
Email ThisBlogThis!Share to TwitterShare to FacebookShare to Pinterest
Labels: "The Ridge", Thanksgiving Weekend

Here I go again, catching you followers up on what we have been doing. Our first outing since my last post was Labour Day Weekend. We were back up to "The Ridge" our home base when we retire next year. What a great weekend it was, beautiful weather and a relaxing time.
In my last post, I was building a dock for on the pond. The caption under one the pics was, " Needs something, let me think about it ". After much head scratching and pondering, I decided to build another section and attach it to the first piece to form a "T". So that's what I did. As luck would have it, our good friends Kathy and Derrick were replacing their deck boards. Perfect timing for us, as we were able to get these boards and use them to make the new dock section and some left over for another project next year.  With the short time left in the season and only being here two more  times this year, I decided not to put the two sections together and in the water until next year, so tune in then to see the end result.


Two weeks later we were back up again, but this time we had our friend Brenda with us. We arrived just after six and set up in no time at all. It was a nice evening so we went to visit Donna & Gerry at their place for a camp fire. It was great for Brenda to catch up with them, she hadn't seen them since last year. OH, it was great for us to catch up also.

Saturday was one of those on again off again  days of drizzle rain but we made the best of it, out when we could and in when we had to. Sunday turned out to be a great day, but we were on our way home by noon. Still all in all a great weekend.
Of course, in between our camping adventure we are still working. The only thing exciting about work is our count down to retirement. As I write this , I have 9 months, 14 days, 1 hour to go, and Pat has less then that.  The other thing going on is that we are in a legal strike position. With out getting into details, all I want to say is that , I don't believe in going on strike and hope that it doesn't come to that.
Last weekend was the Ilderton fair. Ilderton is a small farming community 20 minutes from London. CanAm Rv, where we bought our 5th wheel, asked if we could help out at the display that they had there. Of course we could. So we spent from 10 am to 3 pm talking to people interested in the display. Saturday was a cold and cloudy day but fortunately the rain held off until around 2 pm. 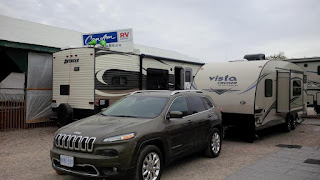 Sunday was a better day so we got some yard work done  and items put away for the winter, for the last time!
That brings us up to date for now. Thanksgiving is next weekend and the one after that is a RV show in Toronto. No promises, but I"ll do my best to get something out soon after that.
Thanks for stopping by, until the next time, take care.
Posted by Bill Richards/ On Our Way at 7:01 PM No comments:
Email ThisBlogThis!Share to TwitterShare to FacebookShare to Pinterest
Labels: at "The Ridge", Ilderton Fair, Labour Day
Newer Posts Older Posts Home
Subscribe to: Posts (Atom)