Where Are We Today
Yuma Lakes RV Resort

Today we woke to the ending of the Super Blue Moon solar eclipse.

Today was departure day for us and George and Suzie. They were up and ready to roll out at 7:30 a.m. We weren't going far, so took our time getting ready. At 10:00 a.m. we said our goodbyes to Deb and Tom and headed on our way. Our destination was Yuma Lakes RV Resort near Yuma, a short 1 1/2 hr drive south on Hwy 95. This route we have taken many times, was a leisurely drive, and to keep with my road rating, I put this at a 7.5 until about 30 miles outside of Yuma, where I drop it to a 6 for about 10 miles, then back to a 7.5.

Arriving just before noon, it wasn't long and we were checked in and set up. The rest of the day was a good old lazy one.


That's it for tonight, hope you all had a great day. Until the next time, take care and be safe. As always, comments are welcome.
Posted by Bill Richards/ On Our Way at 10:06 PM 9 comments:

As promised, here are the drone pictures that I took at Bloggerfest  today. Unfortunately the video didn't work for some reason . Feel free to use the pictures for your own blog. I take the pictures with my drone for my personal use and for you if you wish to have them, they are not sold or given to anyone for that purpose. 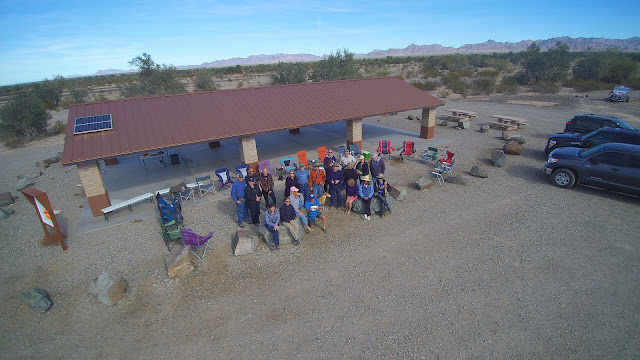 It was a great gatering and nice way to spend an afternoon. Thanks everyone who attended. Until the next time, take care and be safe.

Where Are We Today
In my last post, I talked about our " Blue Boy" ( which from now on I'll call our honey wagon, because ours is really grey, not blue) and how I was making it easier to dump without spillage.


I also ordered a macerator or RV Waste Pump from Camping World, which arrived promptly by UPS. After following the instructions for wiring, I went to attach it to the trailer dump connection ( this a four pin twist on devise) all four clips on the RV Waste Pump snapped off.


The air got blue for a few seconds and that was the end of that. The next morning I sent an email along with pictures to Customer Service at Camping World stating what I had done and asking for advice as to getting it replaced. Within a couple of hours, I received an email from them apologizing for any inconvenience, and stating they were sending another email with a prepaid UPS shipping label. When it is picked up by UPS and the tracking number shows it is transit, they will send out a replacement within 2-3 business days. My return was picked up Friday morning on the 19th of January, so I am hoping that on Monday, I will have notice that the new one is on its way.

On Saturday we attended the Quartzsite RV show, a must when you are here,  the thousands of people who make up the jostling, elbow knocking, people standing in your way crowd and organized chaos that goes along with any event like this, man you got to be in your glory.

Last year when we went to the show, yes we came back for a second time, we found items that we would like to have for our RV, one being a new generator. The one we have is a Champion 3500 watt construction generator, you know, the noisy one. After looking at several over the past year, that would fit the criteria that we set for our needs, we planned and saved to purchase a new one this year. The Champion 3400 inverter generator is what we bought.
The gentlemen at the Champion booth, said they would get it ready for us by taking it out of the box, putting in the oil and a little gas to make sure it ran. When we were ready to pick it up, we just had to drive the truck along the outside of the fence and they would lift it over to us and right into the back of the truck.

Today I installed that light on the trailer. It works well and gives off a good bright light.

There you have it, and as Ken and Shirley said, I was to get on the ball and do a post to satisfy their curiosity.
When the new macerator comes in and I have it up and running, I will let you all know.
We had a bit of excitement  for the second time in the last two weeks, as police, sheriff, fire rescue and ambulance raced to the back of LaPosa South LTVA, don't know what happened, but they left without flashing lights.

Thanks for following along, welcome and read all comments, until the next time take care and be safe.

Email ThisBlogThis!Share to TwitterShare to FacebookShare to Pinterest
Labels: generator, getting you caught up, RV Show

Where Are We Today
Quartzsite Arizona

To start this post a  self analogy is in order. I have never been one to buy dirt cheap, but have always wanted to buy the best and biggest I can, to be clear, not the best and biggest that there is. I always keeping in mind the financial side of the purchase.
Now having said that, this post is about how I wanted to make our " Blue Boy" better. When I bought it, I wanted the biggest one that I could get under the above criteria. The reason for that, was that the waste tanks on our 5TH wheel trailer are quite large, 75 gallons for the grey and 50 gallons for the black.  The bigger the " Blue Boy " the less trips to the dump station, thus the 45 gallon ' Blue Boy " that I purchased.

After assembly, we never had a reason to use it until we were in the desert last winter. The first time we used it and headed off down the bumpy road to the dump station, the end cap would vibrate off and we would be scrambling to recap it, before we had  nasty spillage on the road. With a little ingenuity, we found away to keep the cap on for the rest of the time down here.

I have notice this winter, " Blue Boys "with a dump valve on them, ours doesn't have one. My plan was to remove the hoses on ours and attach a dump valve, then hoses, and we would be all set. Low and behold the outlet nipple on our " Blue Boy " is an odd size and no dump valve will fit it. As many of us have down here, we find away to make things work.
I purchased a dump valve that can be attached to the existing hose and fittings that came with our " Blue Boy" and rattle down the road with no fear of spillage. In addition, as many of our fellow RVers have done, I have ordered a macerater, so that when it arrives next week, I can put the " Blue Boy " in the back of the truck and pump the waste into the tank, drive down the road to the dump station and dump.

That was part of day, while Pat was doing the laundry, I purchased the valve. When we got home, I put it all together and will test it out tomorrow.
Today was also a day to top up our fresh water, an easy task, that I took care of this afternoon. Following that it was some reading, snoozing and Happy hour.

Hope you enjoyed your day, as we did, until the next time, take care and be safe.

Email ThisBlogThis!Share to TwitterShare to FacebookShare to Pinterest
Labels: Dump valve, getting water

My Point of View

Where Are We Today
Quartzsite
Another day in the desert, no projects to speak of, just my point of view on the day.

After about an hour we were back to our spot with a couple of kilometers on our FITBITS. Breakfast was in order then dishes and a shower for me.

The rest of the day was taken over by laziness, reading and enjoying the bright blue cloudless sky. 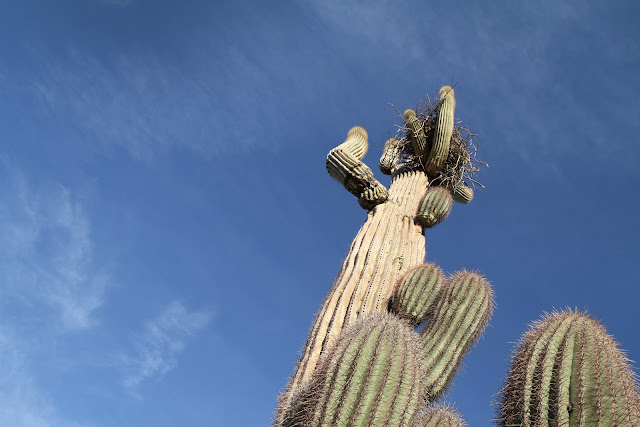 Happy hour happened at our place, while it was more like 2.5 happy hour, filled with good friends, great conversation and laughter. Cool air was setting in and the sun was making a nose dive for the mountains, so we said our goodbyes as everyone headed for home and start supper.

Supper tonight was spaghetti, mine cooked inside, Pat's  and the  meatballs, cooked on the BBQ. For dessert, we had rhubarb pie that Pat had made early today.


After the dishes we both sat to write these words that you so kindly read. Thanks for taking the time to read my point of view, until the next time, take care and be safe. Look forward to reading your comments if you care to leave one.

Quartzsite, Projects and A Walk

Where Are We Today
Quartzsite, Projects, & A Walk
We arrived in the desert at Quartzsite on Sunday January 7th /18 and will be here until the end of the month. Pat keeps you up to date on our daily activities at Patsy, so you know what we have been up to, she lets me write about my little projects, so here I am.
Back in 2016 when we purchased our satellite dish and programming, we got a PVR, two standard receiver boxes, satellite dish, portable tripod stand and coax cable. The installer said we could have 50 feet of cable free, two for the PVR and one for the first box, the second box we weren't going to use right away so I didn't get any for it.
The second standard receiver was going to be used between the TV in the bunky and one in the basement storage of the 5th wheel. I didn't get the TV for the trailer until last summer. When I installed it, I thought I had a 50 ft. piece of coax to use, turns out it wasn't 50 feet.


The other day I went into Satellite Advantage and picked up a 50 foot piece of coax and proceeded to install it along with the 3 original cables. To my surprise it wasn't the same length as the originals. After getting out my 100 foot tape measure, I discovered the originals were more like 65 feet long.
Today I went back to Satellite Advantage and got another 15 feet of coax cable and a connector to make everything the same length. Back home I had it all installed and looking neat.

The other day, George, from Our Awesome Travels, was in buying a handle for his new heater. I asked him to pick me one up to, has we have the same heater. It only took a few minutes to install it and Pat is happy as she can pick it up and move it easily when sweeping the floor or wanting to get into the cupboard that it sits in front of when it is in use.

As you know, Pat likes to walk and is often up and out before I get up. This morning we were up together and I said if she would wait until after I made a quick trip to town, I would walk with her. She agreed and we went for about an hour after I got back from town.

The rest of the day was relaxing, reading and some social time with the neighbors at happy hour.

Hope you had a great day too, until the next time, take care and be safe.
Comments are read faithfully each day, so thanks for making them.