Where Are We Today
Huachuca City, Az
(wa-choo-ca)
(click on pics to enlarge)
Since my last post, our days have been spent mostly relaxing, with a couple of trips into Sierra Vista for supplies and to get Clemson's haircut.

Yesterday we went to Tucson Az. to visit the Pima Air and Space Museum. There are five hangars of different aircraft and one hangar on space. Also there is a narrated tram tour of the aircraft on the grounds of the museum and a bus tour of the aircraft bone yard at the Davis - Monthan Air Force Base. There is also a silo launch site about 60 miles to the south that is part of this museum that you can visit, we haven't been there yet.
Admission to this museum and both the tram and bus tours for the two of us was $57.00, well worth it.
I took lots of pics of airplanes, many I don't remember the names of. The pics taken from the bus have some window glare, so not the best. All the aircraft, at both locations are sitting on the grass, 8 to 10 inches below is hard rock, so no need to pour concrete for them to sit on. The aircraft are sprayed with a two coating process to preserve the instruments inside them. During the summer when temperatures soar above the 100* F mark, the inside of the aircraft soar above 200* F and that would destroy the instruments.

There are two sections to the bone yard, the first is aircraft that can be rotated/put back into service or be used for parts. The second section is for aircraft that are beyond use and are taken apart for scrap.
If you have any interest in military aircraft, this is well worth the tour at a cost of $7.00. You get your ticket at the museum, you don't have to pay for the museum admission if it is just the bone yard you want to see.
The five hangars at the museum are well laid out with aircraft and information on each, also there are many men who are all volunteers, some retired pilots, with loads of information  on the aircraft. 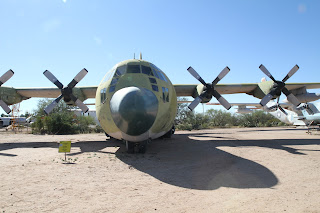 For more on the Museum, click HERE &Here
Thanks for following along, until the next time, take care and be safe.
Posted by Bill Richards/ On Our Way at 2:36 PM