Where Are We Not Today
Alamo Lake State Park
(click on a pic to enlarge)
We were on our way here last Saturday, when we stopped to meet/visit Al, Kelly and Pheebs, from The Bayfield Bunch, as reported in my last post.
Alamo Lake State Park is 38 miles down a two lane paved road, off of Hwy 60, at Wenden, Arizona. There is a Hay farm just outside of Wenden, but after that, there is nothing else on this road until you get to the park. It is an easy drive with a couple of small ups and downs and S curves and hardly any  traffic, so light was the traffic, that when we left, I had Pat drive the 38 miles pulling the trailer, until we got to Wenden.
It brings to mind the old western movies with the cowboy riding his horse or horse and wagon across the open desert or plain, the mountains ridges all around off in the distance.


Descending into the campground, you see the lake in the distance and can immediately tell that the water level is low. Alamo Lake was formed by building a earthen dam on the Bob Williams River, it's purpose is to provide flood control into Lake Havasu. The lake is known for its fishing and recreational uses. At the time we were there, all water skiing and any towable sport behind boats was prohibited because of the low water levels.
The park has three sections with either full hook ups, water and electric or no hook ups at all, there are also some cabins to rent and all at reasonable rates, paved roads with gravel sites, which all have picnic tables and fire pits. Our only drawback was, no internet or phone service in the area we were in, which was "B", they told that area "C" had it, but we found driving just outside the park we could find service also.
You can find wild burros throughout Arizona and the park is no exception, there is a estimated 400 burros in the park, along with bobcats, coyote, fox and of course rattle snakes, scorpions and tarantulas. We were fortunate to see burros and a coyote.

Although not in the park, you can't go to Alamo Lake State Park without going to Wayside. An oasis out in the desert where three dirt roads meet, it has a bar/restaurant and RV park. Everything there runs on a big generator as there is no electric power, and it is also the closest place to get propane. Oh, the food is pretty good to. The dirt roads are passable with a car or truck, just take your time. On Sunday night  we had some rain, while returning from town Monday we decided to go to Wayside for a second time, the first was for propane and to have some lunch. We took the longest dirt road, as we hadn't traveled it yet, and it wasn't long before we came to water rushing across the road from the rain the night before. Not being deep and following vehicles in front us, we crossed the flowing waters in three different areas where the water was flowing down the washes towards the lake. While sitting in the restaurant, another couple from the park came in and they had traveled the other dirt road to get here and commented that the road they traveled had no water crossing it. By the time we both left about 45 minutes later, the water was also following across that road. 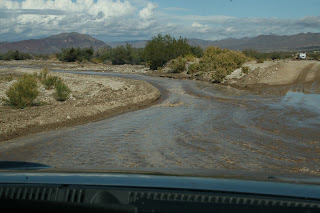 We spent three nights at this park and will go back to it again. It is a busy park for being way out in nowhere and can booked up quickly. There is no limit on how long you stay and reservations can be made up a year in advance. The feeling of  crossing the desert in the old west is what I get, the desert foliage especially the saguaro cactus of which most are a hundred + years old, the quiet and beauty of the desert will bring us back here and other areas of the southwest.
We have moved on up to Bull Head City Az. more on that later.
Thanks for following along, until the next time, take care and be safe.